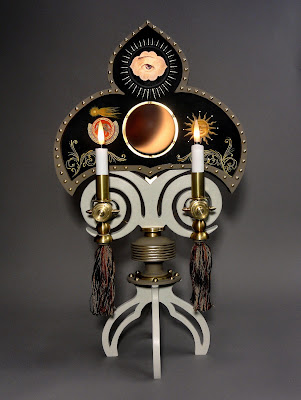 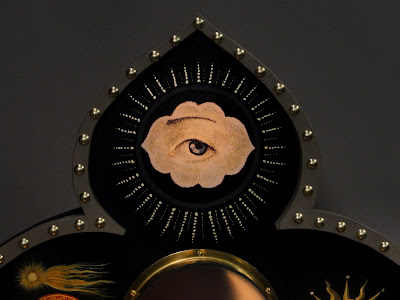 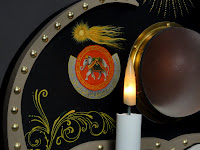 "The Most Excellent Rumi Redux"

On the heels of curating the most highly attended exhibition of the Museum of the History of Science at Oxford University, artist and designer, Art Donovan, continues to infuse his lighting collection with evocative antique and ancient elements.

The crown art is entirely hand painted in gouache and gold leaf with translucent dyes used for the back-lit elements:

The back-lit, glowing “All Seeing Eye” is inspired by an 18th century painting found in an old English masonic lodge.

The flaming comet is accurately hand painted and taken from the 16th century German, "Wunderzeigenbuch" (The Book of Miracles). This book was the worlds' first secular compilation of scientific occurrences in the natural world which were not ascribed as religious mysteries.

The Persian elephant is painted in goauche and inspired by an early illuminated Hindu text.

The crescent moon is a 2" thick, frosted convex lens which is then back-lit and rear painted in deep red to evoke earth shine.

The solid mahogany base is painted in pale matte gray with hand made brass and silk tassels.

The two electric candles oscillate in a most realistic recreation of an actual moving candle flame.

Designed and hand made by Art Donovan, Southampton NY